Truth and / or Beauty

The Boston Globe magazine today surveys new developments in the interface between science and art. Harvey Blume's article includes a talk with a Harvard particle physicist, Eric Heller, who tinkers with his subatomic flow diagrams with photoshop (with startling effectiveness).

Blume also interviews MIT's Felice Frankel, who's carfeul to call her scientific images a "craft" and not "art":


"What's primary for me about my photographs," she said, "is that they communicate scientific information. If by chance they also happen to be beautiful, I'm very happy about that. But I feel I'm revealing the beauty that's already there."

...Frankel believes that abstraction is a useful element of scientific photographs. "I think a lot of my images are successful because they are abstract," she explained. "That allows the viewer to participate." As she describes it, abstraction is a sort of come-on, "a seduction" that prepares the viewer for "another layer of meaning" -- a bedrock scientific layer that, in the case of microcantilevers, involves the physics of microelectrical systems. For her, abstract beauty is not an end in itself; it leads viewers to the nuts and bolts of scientific truths that underlie the image, and then it peels away -- leaving, she hopes, a readiness to recognize other such representations of nature.

Frankel's insistence on -- almost a fiercely protective attitude toward -- scientific truth, makes her impatient with artists who ransack science for imagery and metaphor without taking time to understand it. "I get angry," she says, "at artists who create one-liners, who take a sentence from a textbook and make an installation out of it."


I appreciate her stance. Yet these one-liners might at work with in a different new science-art book Blume mentions:


In her recent book "The Molecular Gaze: Art in the Genetic Age," coauthored with Dorothy Nelkin, [Suzanne] Anker looks at disconcerting outcomes, real or imagined, of the biological revolution -- for example, a mouse engineered to grow a human ear on its back. This trick was pulled off several years ago by researchers at the University of Massachusetts at Amherst, who later harvested the tissue in order to replace damaged tissue on the ear of a child....

Anker discusses the mouse with a human ear as an example of what is known among biologists -- and their fellow travelers in the arts -- as transgenics, the cutting and pasting together of elements from two different beings to produce a third. She notes that in Greek mythology, that third was known as a chimera. She also points out that the technique of cutting and pasting was much in vogue among early 20th-century artists, such as Picasso and the Dadaists. "With the advent of the 20th century," Anker explained, "new ways of looking at the world arose in parallel in the arts and in science."

So it doesn't really matter that UMass researchers weren't thinking about Greek myth or art history when they grew an ear on that mouse. Now that humans can read and rewrite genetic code much as we do computer code, biology may well be the source for the next iconic image. If so, it may not be anything like the graceful double helix.


The author is incorrect on some of the facts -- the UMass scientists were at the Worcester campus, not Amherst. And, as far as I know, the engineered ear was a proof-of-concept and was not re-implanted in a human.

But Anker, an art history professor, might be an example of what Frankel was worried about. Why include the mouse with a human ear (shown below) in a book on molecular biology? The human cartilage cells were mixed into the scaffold ex vivo and inserted into the mouse surgically, subcutaneously (the mouse acted as an incubator). Molecular genetics isn't involved at all, unless you count the use of a nude mouse (which has a defective immune system, unable to reject the human chondrocytes). So why is it in her book on molecular biology?

I don't have the book, so I don't know if they give it the appropriate caveat. One molecular biologist seems to have liked it. The image they probably used is shown below --though the original 1995 CNN health brief has another another iconic image (mice do certain things when they're frightened). 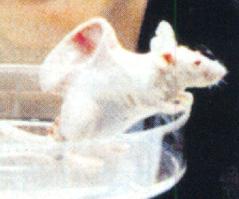 But calling this mouse a "chimera" is misleading -- the term should be reserved for true genetically engineered chimeras. Otherwise, you could say I'm a chimera because I've got some cat fur on my lap.

The mouse with a human ear could have been photographed a hundred years ago, if someone had shaved a rodent and slipped an ear under its skin. In other words, the significance of the UMass photo isn't that mice can sprout new parts, but that we can grow cartilage in certain shapes. Yet the under-informed have latched onto this image as heralding the apocalypse.

Stephen Milloy has tried to enlighten people about this issue in the past. The fact that it's still misunderstood, almost a decade later, implies his work isn't done. And that the image should be discussed as art, comparable to Picasso's minotaurs, is just specious.

Not too many people are going to hang up a photo of this mouse in their living rooms. But someday, someone whose arthritic cartilage was replaced by these techniques might be able to walk over to Anker's office and discuss the real significance of the mouse experiment. That's the truth, and the beauty, of the UMass photo.


as to the question of transgenics, though you're clearly right, this mouse was not a product of genetic reprogramming (& i hope i did not imply it was), anker does, in fact, discuss it in that context, though she would probably agree with you fully that she was using that term -- and the term "chimera" -- loosely to make her point. she then goes on talk about phenomena that are transgenic in the technical sense. i think she's simply trying to open our minds to the idea.