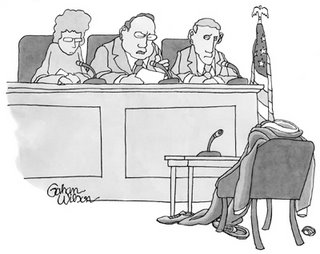 In the back page of The New Yorker, they now offer up cartoons for readers to caption. Not only have I worked with this week's caption contest winner, I've written about him before (during my residency interview, he coined the phrase 'cocktail party research' which I still use frequently... at cocktail parties).

He said his past research was guided so minimal efforts yielded maximum exposure.

With this caption I'd say that he's continued to follow that dictum -- but I've also learned he's written a fiction book about malpractice, surely a lot of effort for a smaller audience than the New Yorker. The book is narrated from the perspective of the defendant, one Dr. Charles (but not that one)...

If the book is as funny as his caption, I'll happily count myself as a member of this smaller audience.
: Tuesday, March 07, 2006 : comment :
Newer Post Older Post Home