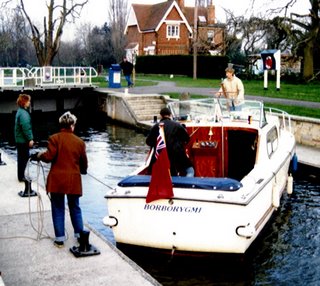 Grand Rounds is up at NHS Blog Doc. Dr. Crippen includes lots of pictures in this edition, but has allowed me to run the one on the right -- it's his boat, the Borborygmi.

No, this did not influence his placement in the Grand Rounds hosting queue. Nor did this blog influence his naming of the boat. I suspect it's a reference to sea sickness?

Speaking of queasy stomachs, the demise of PaedsRN's GeekNurse blog is causing some well-justified fear, and anger at overzealous risk management censorship. This has touched off a few good posts and an interesting discussion at Random Acts of Reality.

I recall a medical student blog that was taken down last year, along with the potential for disciplinary action or expulsion... and a resident blog that was removed in 2004 -- again, with the threat of termination. I hope, at the very least, PaedsRN's employment is not in jeopardy, but I don't believe anyone has heard from him since his farewell post.

Through it all, I imagine there are some hospital administrators, somewhere, congratulating themselves on limiting their hospital's liability. At least they're sleeping easy.