Emergency medicine keeps getting better and better. People warned me that, aside from the (relative) glamor of the traumas and rotor-wing aircraft, it was a lot of thankless drudgery and abuse. Not so! Or at least, I'm not at the point to consider it as such.

I'm sure I'll get around to posting about the lacerations, overdoses and other neat stuff I've been seeing. For now, though, blogborygmi fave Ingrid Jones has requested pictures from my recent helicopter trip. We were called by a smaller hospital to transpost a heart attack victim for cardiac catheterization. A routine flight for the crew, but I found it exhilarating. I apologize for the low-res cameraphone quality. And by the way, no one was harmed in the making of these pictures -- the patient did alright. 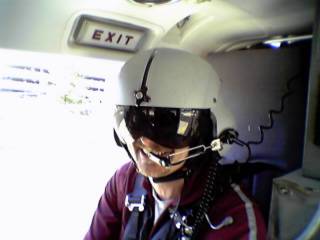 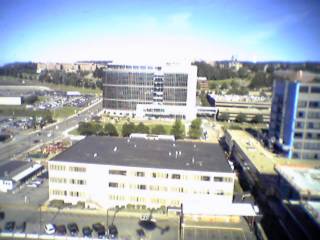 Above left: Dr. Tom's grin goes a long way in calming pre-flight jitters. The launch was the bumpiest part, and even that was fairly smooth. Right: I've been working and studying in these buildings for years, but can appreciate the new perspective. Can you see the construction crew on the building on the right? Of course not; too blurry. But our shadow is apparent, a few hundred feet below us. 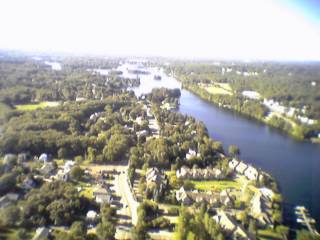 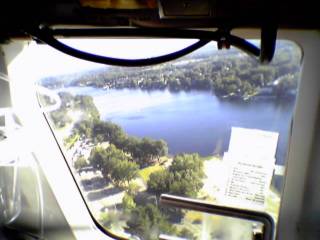 Here are two shots of the narrow lake where I used to sail.

It turns out there's a delicate weight threshold for these trips. If it's too humid, or too cold, the helicopter blades can't provide lift for a student, patient, pilot, flight nurse, and flight physician, and their gear. The students are the first to get cut. In fact, we're told to bring a cell phone, or taxi fare, in case we find the patient is too heavy for both of us to make the return trip.

Mapquest says our trip, by car, would have been 22 miles and taken 33 minutes each way. I think we were in the air for just over ten minutes, round trip. A very memorable ten minutes.