Harmony in the ED 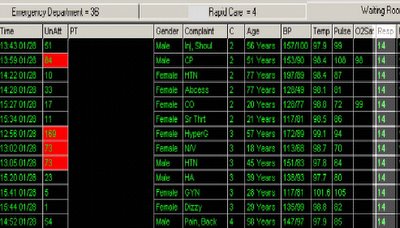 From the November 2005 issue of Annals of Emergency Medicine, by Goyal, Hollander and Gaieski at Penn:

"The Figure displays an underrecognized clinical phenomenon for which we are proposing the term 'synypnea.' Synypnea is seen across the country and is defined as when emergency department waiting room patients have the same respiratory rate. We think it is pathophysiologically linked to menstrual synchrony. There is little scientific exploration on this topic, however, which represents fertile grounds for original research."

This is too funny -- it exposes one of the more absurd aspects of a job full of unacknowledged absurdities.

Now, I'm too new at this to speak authoritatively on the historical perspective of respiratory vital sign reportage. My understanding is that, for decades, nurses would faithfully collect the blood pressure, heart rate, temperature, and would simply jot down "RR = 20" on patients that seemed to be breathing comfortably -- even though twenty inpsirations per minute qualifies as mild respiratory distress.

By the time I was a medical student on surgery, we was told to never present a patient "breathing comfortably at 20 respirations per minute" -- and that if we did, we'd be holding retraction for the rest of the month.

But since most patients had "20" listed on the vitals, and since actually collecting the vitals on our own was out of the question, the students had an internal debate: Normal was about 10-12. Some of the patients in pain were breathing at 16. What should we settle on?

It seems our compromise -- 14 respirations per minute -- has become the standard at teaching hospitals across the nation.

As for Hollander's interpretation of the phenomenon, I would drop the second "y", and call it synpnea (it's more true to the Greek roots). And I wonder if his linking this to menstrual synchrony was a subtle jibe at the nurses who collect the vitals?
: Saturday, November 05, 2005 : comment :
Newer Post Older Post Home